The Academy's core content has been consistent in meeting the highest level of firefighter training. The requirements for physical fitness for each recruit are both strenuous and demanding and only exceeded by the academic standards where excellence is expected, not just requested.

Graduates of the El Camino Fire Academy have been hired throughout the county, state and nation. They have been trained to the highest standard and are ready to serve you in your time of need.

There is a classroom that seats approximately thirty students and an engine room. We have three Class A Diesel Pumpers and a Truck Company.

The drill grounds are comprised of a four-story fire rescue training tower, a fire environment building; where the students combat live fires, and we also have a Swede System I Flashover Training Container for Flashover Training. 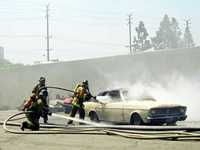 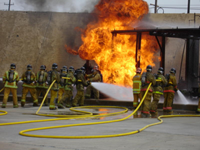