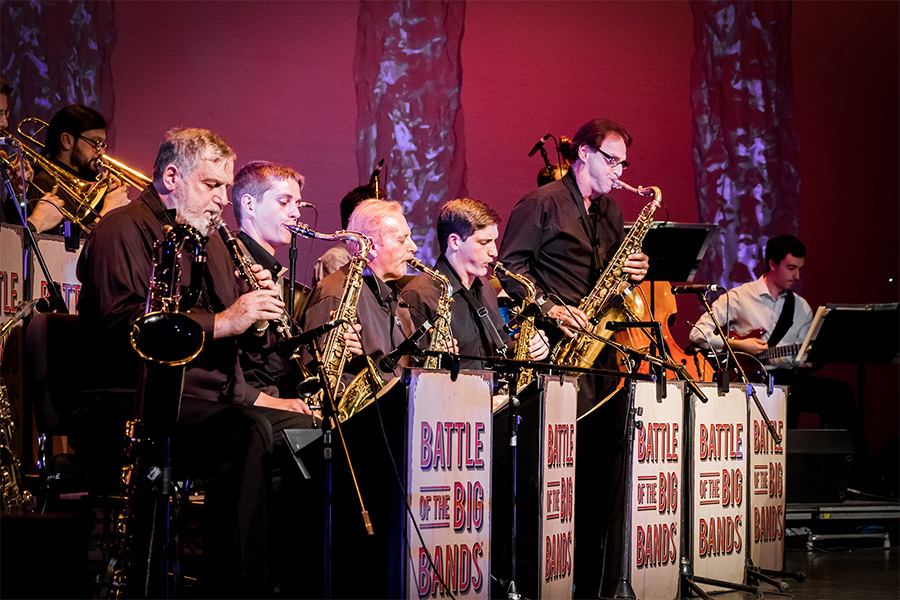 The “Battle of the Big Bands” comes to El Camino College’s Marsee Auditorium at 2 p.m. Oct. 15, featuring the best in live 1940s music.

In this showdown between two big bands playing original tunes from famous ‘40s bandleaders Glenn Miller and Tommy Dorsey, audience members will select a favorite at the end of the evening. The two bands will fill the stage with 30 musicians, joined by vocalists Bill A. Jones, known for his role as Rod Remington on Fox TV’s “Glee,” and Nancy Osborne, an actress and recording artist who has performed with several big bands.

Tommy Dorsey, a trombonist and swing band leader in the 1940s and 1950s, performed with his family in The Dorsey Brothers before following his own path as a bandleader and composer of more than 280 Billboard chart hits. Glenn Miller, after working with Dorsey and his band for a time, moved out on his own to write hits such as “Moonlight Serenade,” “Wishing (Will Make It So)” and “Over the Rainbow,” while leading his own successful band.

Tickets for the performance range from $29-$49 and may be purchased online at centerforthearts.org using the online ticketing system, or by phone at 800-832-ARTS. The Ticket Office is open Monday through Friday 10 a.m.-6 p.m. Campus parking is $3. Marsee Auditorium is located at 16007 Crenshaw Boulevard, Torrance.