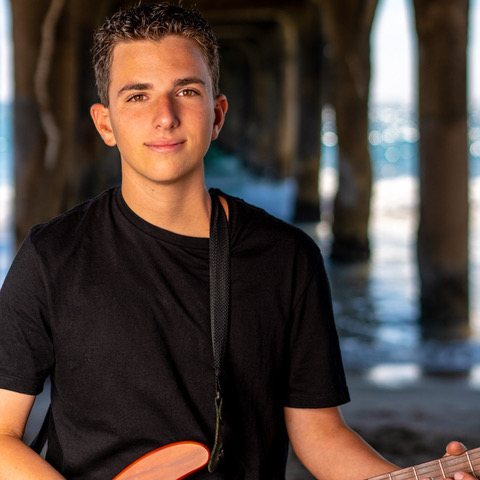 Matt Morreale is a multitalented musician who has been winning awards since he first picked up a guitar at age 5. He also sings, writes music, and plays piano. By the time he was 12, he was recording his own songs.

Now at just 17, Morreale has written and produced more than 40 original compositions and still finds time for his studies as a psychology major at El Camino College. An artist pursing a science degree might seem like an unusual combination, but Morreale said it works for him.

“I first came to El Camino for music, but then I took a variety of classes and found that I am interested in science also,” said Morreale, who is involved in the college’s Honors Transfer Program and South Bay Promise. “I think that is a great thing about El Camino, I can try many different things. Now I have two viable career paths, and I really like both.”

The San Pedro native finds inspiration in whatever he’s feeling at the moment. He has developed his own brand of music, drawing from influences such as Ed Sheeran and Keith Urban to create a sound that blends pop, country and electronic genres.

Morreale’s original song, “Somebody Else,” was recently named “Best Song of The Month” by SongwriterUniverse and is featured on his debut EP called “Me – U,” which he released independently last summer. Contest judges said the award-winning composition is “an appealing, melodic song that could easily receive airplay on modern pop radio.” Morreale appreciates the praise as he works to connect with even more listeners.

“Music is something that will always be part of me; it’s something I was born with,” he said. “Music is a way to express whatever I’m feeling. Once I put it into a song, I feel better. It gets even better when people hear something they can relate to.”

Throughout the writing/recording/producing process, ideas can come at any time; sometimes Morreale will wake up in the middle of the night with a new concept. He is currently focused on sharing his recently released new single “Not Today.” He also released “Alone in LA” this past spring.

“I think a lot of people will relate to this song, especially during this pandemic, because it's about feeling lonely and hoping someone is there with you,” he said. “It was written during the ‘safer-at-home’ order as a response to the solitary aspect of what people are calling ‘the new normal’.”

Among his many awards, Morreale won state and national recognition from the Royal Conservatory Music Development Program, taking home the top prizes for his performances. He has also performed at USC’s prestigious annual Festival of Excellence and participated in a variety of festivals and symposiums, often winning first-place awards for his work. He plans to continue working on his music at El Camino while also considering a career in health care.

Morreale enrolled in ECC when he was 16 and said that at first, he felt a little intimidated being among the youngest students.

“That didn’t last long, everyone was so nice and welcoming,” he said. “No one seemed to care about my age, we are just working together. El Camino is great. I’m sure I’m in the right place.”

To listen to Morreale’s award-winning song, “Somebody Else,” and other original music, view https://songwhip.com/matt-morreale.