To honor Coach Featherstone's accomplishments on and off the field, the new John Featherstone Fund for Athletic Excellence was established in support of ECC Warrior athletics.

Losing A Legend: The Passing of Coach John Featherstone

It is with a heavy heart that El Camino College shares the sad news that beloved former El Camino College Football Coach John Featherstone passed away March 20 after a long and valiant battle with Alzheimer's disease. He was 71.

Coach Featherstone, fondly known as "Feather," was revered by thousands of former students and supporters of Warrior athletics, and was a community college football icon. He retired from El Camino College in 2015 after 31 seasons, with an overall record of 214-119-2. Featherstone retired with the highest winning percentage among active coaches who had coached for at least 15 years in the Southern Section of California, which includes 37 community colleges from Bakersfield to San Diego.

In honor of his service and outstanding record, the field inside El Camino College Murdock Stadium was named Featherstone Field on November 16, 2019, before the Warriors' homecoming football game.

"Coach Featherstone will always be remembered as a caring and dedicated coach who demonstrated the Warrior spirit on a daily basis," said El Camino College President Dena P. Maloney. "His influence on thousands of student-athletes has left a legacy on the world of college and professional level sports for years to come."

Under his leadership at El Camino, the Warriors earned a national championship in 1987, a state championship in 2006, 11 conference championships, and appeared in 19 bowl games. From 2004-08, Coach Featherstone's teams made five consecutive Southern California playoff appearances, and throughout his career he led his teams to 21 nationally ranked finishes, including seven straight from 2003-09.

"Coach Feather was the perfect embodiment of the Warrior Spirit. He lived his life with passion, determination, hard work, and competitiveness. He fought every battle with fearless tenacity and a never say quit attitude. He was the eternal optimist who believed we could come back from any deficit no matter how large and find a way to win. He instilled these same qualities into his players, which is why so many of them overcame severe life obstacles in order to achieve success in their lives," said Gene Engle, longtime assistant football coach. "He was not only my colleague and friend, he was in many ways my brother. For 31 years we worked side by side on this adventure we call college football. His passing leaves a huge hole in my life and the lives of thousands of others. He will always be the standard that all Warriors will be measured by."

Featherstone was also a standout athlete, first recognized for his offensive prowess as a quarterback, running back and wide receiver at Mira Costa High School in Manhattan Beach, earning All-CIF honors as a wide receiver for the Mustangs in 1967. He also competed in track and field, baseball, and volleyball. From there, he played two years of football at El Camino College, earning all-conference honors and receiving a scholarship to play at San Diego State University. He made an immediate impact in his junior year, leading the Aztecs to a win in the 1969 Pasadena Bowl before 52,000 fans. With two touchdowns, Featherstone was named Most Valuable Player of the game, and led the Aztecs to a record of 11-0 in the season and a 12th-place finish in the national AP poll.

The beloved coach had deep roots in the South Bay, and a legacy that reached far beyond athletics. Whether on the field, in the classroom, or in the community, Featherstone always encouraged his players to strive for excellence athletically and to pursue a college education. After leaving El Camino, more than three dozen players went on to play professional football, become All-American athletes, and transfer to universities to continue their education and play football.

His career was recently featured in an issue of Sports Illustrated that documented his relationship with and coaching of former El Camino College student-athlete and recently named University of Texas at Austin head football coach Steve Sarkisian. This story of mentorship is just one of many in Coach Featherstone's long, impactful career.

Coach Featherstone will be greatly missed throughout the South Bay and beyond by the thousands of individuals he nurtured to greatness during his awe-inspiring career. 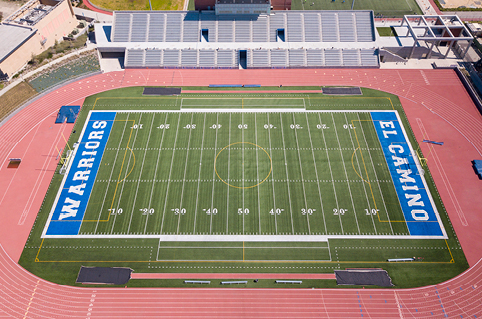 Featherstone Field was officially dedicated during a celebration at the Warriors’ homecoming football game in 2019.Donate

As a way of recognizing Featherstone's many years of dedication and service to El Camino College, the field in Murdock Stadium was named Featherstone Field in November 2019.

Coach Featherstone, widely known as “Feather” to thousands of former students and supporters of Warrior athletics, is a community college football icon.

He retired from El Camino College in 2015 after 31 seasons, with an impressive overall record. Under his leadership, the Warriors earned:

From 2004-08, Coach Featherstone's teams made five consecutive Southern California playoff appearances, and throughout his career he led his teams to 21 nationally ranked finishes, including seven straight from 2003-09.

To further honor Featherstone's accomplishments on and off the field, the new John Featherstone Fund for Athletic Excellence was established through the Foundation for those who wish to make a donation in recognition of ECC's beloved coach.

This fundraising campaign will support athletic teams at El Camino College, in order to provide the best equipment, facilities and uniforms for Warrior athletes.

Gifts to the John Featherstone Fund for Athletic Excellence can be made below.