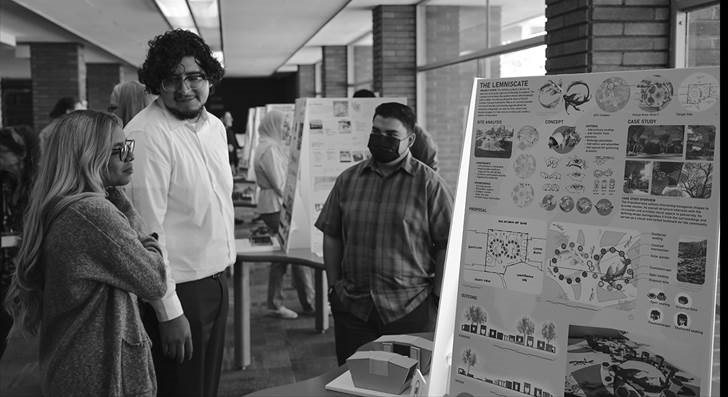 Students and faculty of the Departments of Architecture and Environmental Technology at El Camino College have officially launched a campus-wide effort to initiate a discussion about the design and function of outdoor spaces in the college experience.

Starting as an academic exercise titled “Campus Interventions,” El Camino’s architecture students were charged with observing, documenting, analyzing and designing an intervention in one of six preselected areas dispersed throughout the campus. These spaces are typically the plazas, lawns, patios and other areas of focus found in between the academic and administrative buildings.

“These spaces remain largely under-utilized and yet they have enormous potential to alter the campus experience for students, faculty and staff alike,” says Marc Yeber, adjunct faculty member, and curator for the exhibition and related events. According to Yeber, the students identified multiple challenges such as the lack of shade, uncomfortable seating, poor night-time lighting, and insufficient dining options, to name a few. “During the design process, they considered constraints and opportunities in an attempt to address the deficiencies and other challenges found in these spaces,” he explained.

With the intentions to cast a wide net to encourage participation, the series of design intervention events grew from a simple exhibition of student-led design proposals to include a roundtable discussion and an online survey. To further this effort, Dr. Jacquelyn Sims, the Interim Vice President for Academic Affairs suggested that a report and proposal be drafted for consideration during the College’s future master planning efforts. As such, the survey results, discussion, as well as the student findings and proposals will be compiled and analyzed, all with the aim to present recommendations to the Campus Facilities Committee.  The online survey, which can be activated via the QR code found at both the exhibition and through various digital and social media announcements, will be available throughout May.

The exhibition at the Schauerman Library runs now through Thursday, May 19, and will culminate with a roundtable discussion consisting of a panel of campus design experts, faculty and staff members along with current and former students.